A humorous dictionary of the human condition. In this international lexicon, learn the collective noun of librarians (in French), how to describe the type of blister caused by wellies that eat your socks (in Bosnian), the haircut of a maiden aunt (Latvian).

This short book is cheerfully indebted to The Meaning of Liff, by Douglas Adams and John Lloyd, which in turn owes its existence to an earlier tome by the humourist Paul Jennings (Ware, Wye, Watford). Prior to that it was a game in the type of boarding school that had no heating or television and whose inmates therefore had to come up with their own amusements to take their minds off the perishing cold.

The Empiricist’s Lexicon (International) has come among us to celebrate the elasticity of language around the globe; the sheer flexibility of words in the eyes of the beholder, the simple pleasure of shaping new meanings and fashioning the tools to describe those aspects of EXPERIENCE – the common condition – that have as yet gone undescribed, uncatalogued and, thus, suffered in silence.

Or it could all just be the innocent fun of making words up, making existing words fit uncatalogued conditions and generally messing about with semantics.

Robin Bennett, Chairman of The Aktuel Translation Group, 2016 and Editor-in-Chief 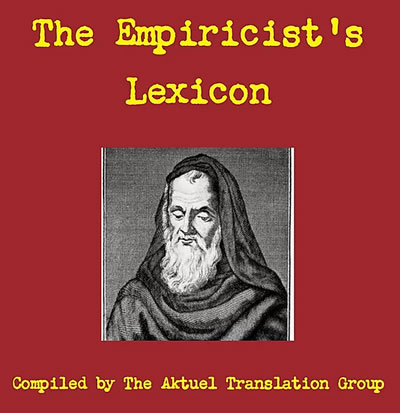 100% of the profits will go to Translators Without Borders. About: Traducteurs sans Frontières (TSF) was founded in 1993 by Lori Thicke and Ros Smith-Thomas to link the world’s translators to vetted NGOs that focus on health, nutrition and education.